The story I'm about to pen started many moons ago when the water, in particular, was run by a small local angling club. The lake in question at the time was stuffed full to the brim with bream and had a very small population of carp. The stock mainly consisted of commons around the low 20-pound mark.  If I was to hazard a guess, I would say at the time there was around 15-20 carp in around 10 acres of water.

Back then there was always a rumour of a large uncaught common and a mirror, This rumour seems to travel to every lake, the uncaught monster that is very rarely seen let alone caught. I had never seen the mirror nor the common at this time but had seen a picture of a low 30 common caught some 7 years previously. Over my on and off years on there I caught plenty of fish in the low to mid 20 bracket but no big elusive common. Over the next 5 years or so that fish was never far from my mind but I was fishing other waters so never gave it any more attention.

One day a few years later I decided to stop and have a walkabout. The small club was no longer controlling the angling on there and there were rumours that all the fish would be taken out as the fishing was to cease. I don't know what made me stop, maybe nostalgia but I just stopped for a look  Nothing much had changed but it did look nice and I had a feel for it again. I decided to hatch a plan to maybe give it a night or two. Before doing this, I spent the next few weeks wandering and looking for signs of which I found plenty. I noticed fish visiting a certain corner. One particular afternoon, I was perched up a tree watching and all of a sudden there it was, a common of serious distinction, It looked upfront and angry gliding into the corner with an attitude like it owned the lake. I could hardly contain myself so decided I needed to get a rod out. Unfortunately due to home and work commitments, I could not get down to the following evening so that would have to do. 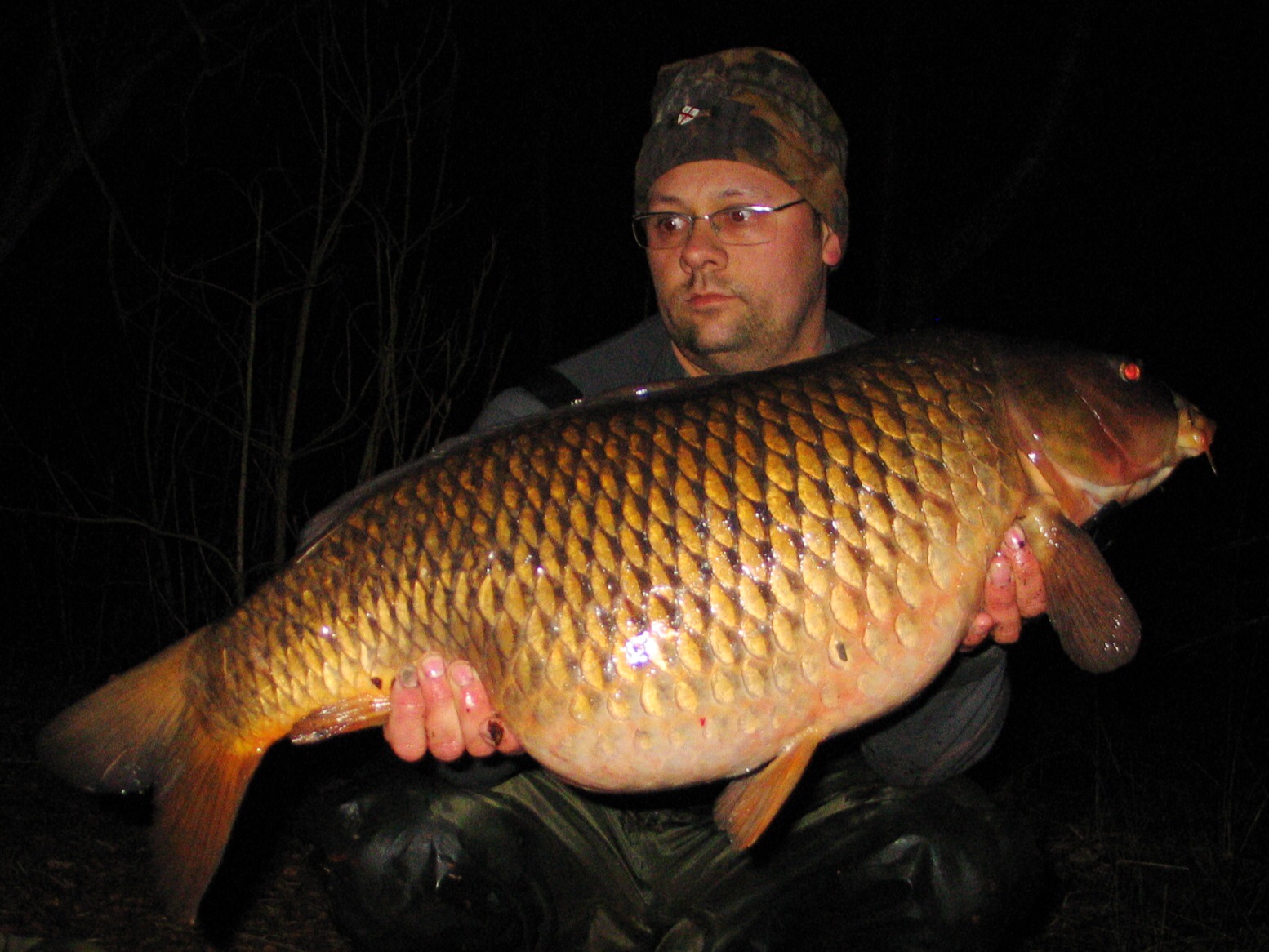 I waited patiently for dusk to fall and made my way to the lake. On my arrival I was greeted with the most of heartbreaking sights,  There were dead silverfish and Perch everywhere over the corner  Tyre tracks and wader footprints confirmed my worst fear, the lake had been netted. I was gutted  I had not only missed my opportunity to catch this great myth of a fish but I had lost the chance for good by the looks of it.

A chance conversation in a tackle shop a couple of years later suddenly changed all that, I was given confirmation that not only all the fish hadn't be taken by the netting but the big common was still in there and also been caught. It was caught by a guy along with another low 30. This was all the information I needed that it was still there, I didn't care if it was only one of possibly two fish left in there but it was there and I wanted it  Over the next coming weeks I hatched a plan with a good friend of mine Tony the German. Tony is a very methodical angler that is now a great loss to carp fishing as he turned to the dark side of Eel angling.

We planned to bait very heavy over one large area. When I say heavy, it was heavy. I employed the use of a little Sevylor inflatable boat. Now when I say little, it was very little. when deflated, it fitted in a little buzzer bar bag. Access to the lake was from a dead-end back road with only a couple of houses down it. We had to go in after dark and parking in the car park was not an option. I've not mentioned it before but this lake is very well known for some very seedy going's on in the bushes. Trust me when I say, you would not want to hang around in that car park after dark!!!!!!  There was some very colourful goings-on there.

The boat plan was working a treat and I was baiting every other day with a minimum of two big 25 litre buckets full of hemp, with a handful of tigers in each bucket. We would then fish two rods each over this area with balanced tiger nut hook baits. Rigs were kept very simple, coated hook links with the last inch stripped back. I was using a curved shank hook and a kicker, this was all fished on a 4ft section of lead-core and fished helicopter style. It was early in the year so darkness was falling very early, this made it very easy for us to get to the lake early in the evening. 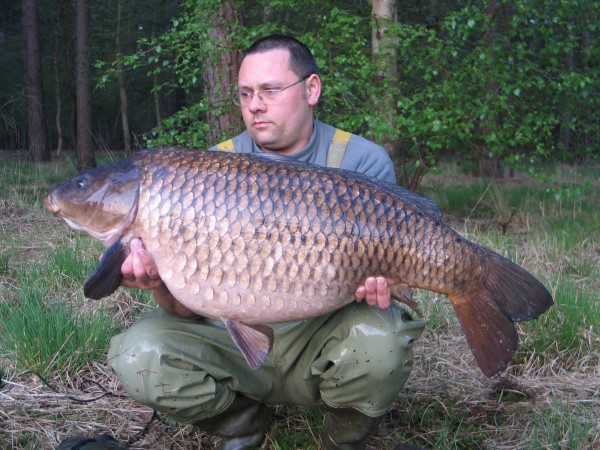 The little boat served me well until a very unfortunate incident when I was out in the middle of the lake it was this particular night when I realised the poor little boat only has a weight limit of 75 kilos.  Well, I was a modest 80 kilos and didn't think about the amount of bait I was also putting in the boat with me. I would say at a guess there were at least 30 kilos of bait in there with me.

All of a sudden I was hearing a hissing noise quickly followed by a deflating feeling. Within seconds I was balancing on what can only be described as a very small lilo as the main chamber had blown out. Suffice to say I ended very wet and very cold very quickly! Going into the lake on a cold April night is not recommended.  Even worse than this, when I got back to my van I had to risk undressing out of my wet cold clothes to drive home. My eyes were fixated on the bushes in case I was being watched.

With this lesson learned, we then employed the services of Tony's small Bic solid plastic boat. This was a godsend! We loaded it with all our bait and pulled it across the forest floor to the edge of the lake. We started fishing one overnight a week as well as keeping up the baiting. I was packing up for work at around 5 am whilst Tony was fortunate enough to have an extra hour or so. One particular morning, Tony had the first bite, unfortunately, it wasn't to be and the fish was lost! Getting to the rods for a take was no easy feat as we were set up in the bog swamp of eternal stench. We did make it a bit easier by employing my good old grandad's gate that I had taken off and replaced for him. This made the perfect platform to run to our rods. Every time we packed up we hid it in the reed beds. To add insult to injury, when he got back to his car someone had very obviously had a more productive night than he had. He got to his car to find a stack-up of empty Stella cans, a used condom and some handprints on his bonnet!

A few sessions had passed and with no sightings. Hearing fish crash in the night was a no-no because of the close proximity to the noisy motorway, but the street lamps made if good for fish spotting. On one cold wet and windy evening, my first opportunity arose. I was on the lake alone and there was a strong North-Easterly wind blowing into my area, The wind was cold and I was not confident at all. All night my alarms were making the usual bleeps and noises made from wind and floating debris, then all of a sudden the noises suddenly became more urgent.  With all the bleeps all night it's so strange that as anglers we suddenly know when it's more urgent.  It was not screaming off but there was definitely something attached. The fish wanted to kite left towards a very snaggy island, but fortunately, I could see in the street lights that it was going to miss the snags on the island! The fight finished very uneventful but there laying in my net in a ball of weed was a carp. Not the myth but a carp, all the same, It was a very red-faced (literally) common of around mid-twenty. I was over the moon! It fuelled the fire even further.

I continued to bait and we started to get a little more blatant and started with some early morning bait ups.  This was undertaken in snow and all sorts of extreme weather. One particular morning we were on our way to a work party and had some time to kill so we both went out in the little boat and baited, then had a risky drift around the lake in the daylight to see what we could spot. We were ended up drifting around far about half an hour! On our way back we decided to drift back over the baited area. As we got to it, we both sat there and froze as in the murky water there he was! He looked his normal angry aggressive self munching bait without a care in the world. We were buzzing and couldn't wait to get back down!

Two days later we were there rods out and the conditions were bang on. Another strong North-Easterly wind was blowing but this time I was super confident that not only the conditions were the same as when I last caught but he had been seen in the area. Surely one of us would have it!

Well, at 4 am my left rod lifted up and kited left towards the island. I was a mess out in the water playing this fish. Tony was in front with the net and did a sterling job netting the ball of weed and carp on his first attempt! We carefully spread the weed with high hopes and expectation like kids at Christmas.

There he was in all its glory, my journey had ended and I loved every minute of it. We waited an hour or so before taking the pictures in the mosquito-infested swamp. I looked like I have measles by the end of the photos but I didn't care!

Many a person has claimed to have caught this fish before and after my capture but I know of only a confirmed 2 people. As they say, the photo album doesn't lie. For the record, he was 37.8lb of underslung mouthed common carp perfection! Not an ounce of fat just pure muscle.

I felt privileged to catch this magnificent fish and now to write about it Is the mirror there? Who knows and maybe soon I may pop back and try my luck again? 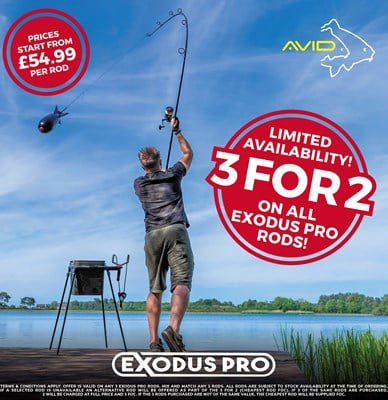 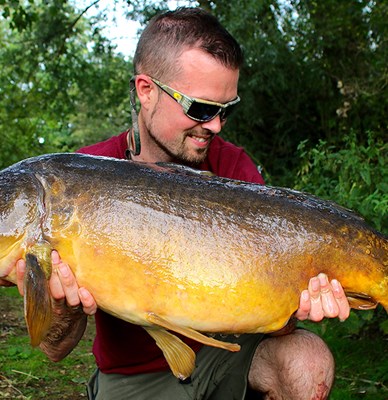 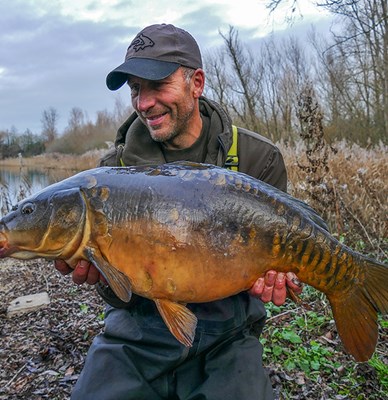 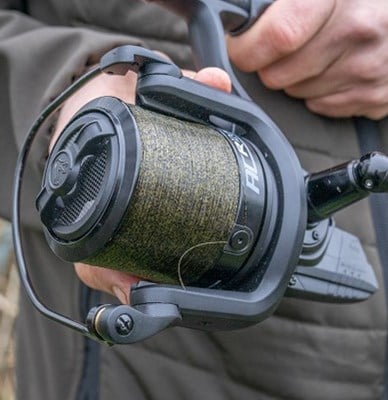 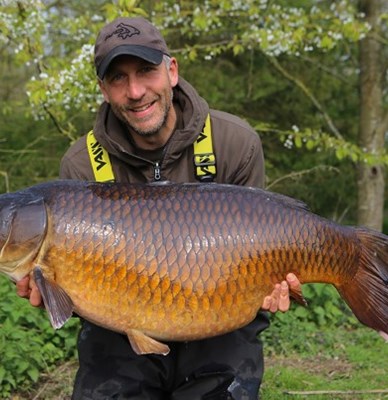